Things To Do In Dublin

All of the Dublin Gay Theatre Festival venues are in the city centre within walking distance of each other and within easy reach of the main tourist attractions and city hotels and hostels.

Getting to know Dublin: 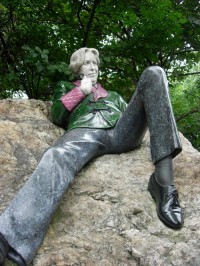 The city centre is divided by the River Liffey into two main areas – ‘Dublin 1’ north of the river (known to Dubliners as ‘the Northside’) and ‘Dublin 2’ south of the river (‘the Southside’).

The main north-south axis is from Parnell Square and O’Connell Street (the city’s main street) on the ‘Northside’ to Trinity College, Temple Bar and Grafton Street (the main shopping street) on the ‘Southside’. All of our venues are close to these streets.

Before your visit we recommend printing our online venue map to become familiar with our venue locations.

Don’t forget to check out the official Festival hotel – The Mercantile Hotel – which is offering special rates for Festival visitors in its two city centre hotels close to all of our venues. You can also mingle with the production companies and other Festival goers! Most other hotels and hostels are located close to O’Connell Street and Temple Bar.

Your first stop should be to the Dublin Tourism Centre on Suffolk Street (at the north end of Grafton Street). There you will be able to collect maps of Dublin and other information with staff on hand to answer any queries.

For more: download the Visit Dublin apps for iPhone or Android. Check out the Dublin Tourism website for information: www.visitdublin.com

Getting to and from the Airport

There are a range of options to travel to and from Dublin Airport. While there is no direct rail link to the city centre there are frequent buses and taxis available for travel to/from the city centre. The journey takes approximately 30-40 minutes. Click here for details.

Note that Dublin Bus ‘Airlink’ and the ‘Aircoach’ will both bring you close to the festival hotel – The Mercantile Hotel. Tell the bus driver that you want to get out at Trinity College/College Green stop, the hotel is 5 minutes on foot along Dame Street.

The ‘Luas’ is a tramway with two lines (Red and Green). The Red line connects Heuston Station, Connolly Station and Busaras and is good for short hops from east to west in the city centre. It is also convenient to some Festival venues such as ‘Outhouse’, ‘Pantibar’ and ‘Teacher’s club’. The ‘DART’ is an urban railway which travels along Dublin Bay from north to south and is recommended for slightly longer journeys in and out of the city (Connolly Station is the closest stops to most of our venues, especially north of the river). ‘Dublin Bus’ provides transport across the city – most main city centre bus stops are around Trinity College and O’Connell Street.

If using public transport to reach venues, bear in mind that some bus services might be subject to changes due to the work for the new Luas (tram) line. All details can be found at www.luascrosscity.ie

Taxis are reasonably easy to find in the city centre (although you may have to wait at peak times such as 3-3:30a.m. when night clubs close). Large taxi ranks include St. Stephen’s Green north and on Dame Street near Trinity College. If you have a smartphone you can use Hailo to easily book a taxi on the go.

Since traffic can be heavy in Dublin City centre we suggest travelling on foot for short distances. Dubliners are generally quite friendly so don’t be afraid to ask for directions. Our front of house staff at venues are also available to help you if you have any questions. Do give yourself enough time to travel between venues if you are unfamiliar with the city or choose shows that are in the same, or nearby, venues. The time needed to walk from one venue to another varies between 5 and 20 minutes.

Please note that streets in Dublin have a tendency to change names suddenly (!) so look for blue street signs at intersections. Also note that streets with similar names may not be beside each other. For example South Great George’s Street (the location of ‘The George’ gay bar) is south of the river while North Great George’s Street (location of ‘The Cobalt Café’ and ‘The James Joyce Cultural Centre’) is a 15-20 minute walk away, north of the river.

Note that travel on foot is quite safe in Dublin city centre, comparable to other European cities. However as with any city we recommend applying common sense regarding personal belongings and stick to busy well-lit busy streets at night time. If in doubt take a taxi.

Festival venue ‘The Cobalt Café’ on North Great George’s Street is open for lunch as well as serving wine and drinks in the evenings. Venue ‘Outhouse’ on Capel Street has a small café serving sandwiches and drinks.

We will host a Festival Club every night after the evening’s shows. The nightly venues (all centrally located) will be announced in our newsletters or ask our front of house staff for details.

Information on Gay Dublin can be found at gay community centre ‘Outhouse’ which also has a small café. Popular gay bars include:

Pantibar – one of our Festival venues, Pantibar on Capel Street is open seven evenings a week. It is the ideal place to have a drink before or after a show in the nearby Teacher’s Club or Outhouse. It hosts a range of events throughout the week.

The Front Lounge – another popular bar, serving food during the day and drinks in the evenings. Open late at weekends.

The George – a well-known Dublin gay bar and club and Festival Club venue. Particularly busy at weekends and famous for its Sunday evening drag bingo and show.

Bars are shown on our venue map. For more information on LGBT venues drop into Outhouse – Dublin’s LGBT community Centre (and Festival venue).

Our Festival health partners are – STD Clinic at Harolds Cross Surgery – The clinic is run by one of Ireland’s most highly regarded experts in the field of sexual health, Dr. Shay Keating. The STD clinic offers a full STD screening including HIV results within 10 minutes. It also has the facilities for HIV Post-exposure Prophylaxis. This is a treatment to reduce the likelihood of HIV infection following sexual exposure, within 72 hours.

Did you know that Dublin is one of only four UNESCO Cities of Literature? While you are visiting for the Festival we recommend a number of places with links to Dublin’s famous authors and playwrights:

There are numerous other places to visit as well as tours and literary pub crawls! Check out dublin.ie and visitdublin.com for more.